The density and rapidity of political events and upheavals that characterize Europe in the Napoleonic period, between the end of the 18th and the beginning of the 19th century, make it a particularly interesting scenario for iconographic investigations that deal with historically determined "pentimenti", i.e. those changes of subject and composition that artists decide to operate on their works (in progress or by creating more successive versions, one on top of the other), which are motivated not so much or mainly by stylistic reasons, but rather by the changed conditions of the social, political and cultural context of their destination.

With this article we come to the fourth and final episode of the “unveiled images” cycle: find out about the others here.

An example of this is the work Monsieur de Norvins by the French painter Jean-Auguste-Dominique Ingres, now preserved in the National Gallery in London (after having also belonged to the painter Edgard Degas), originally painted in 1811, during the author's stay in Rome (1806-20).

One of the greatest portrait painters ever

Ingres is to be counted among the greatest portrait painters of all time: being portrayed by him constituted a significant passage of reference and legitimation for numerous protagonists of the French political class of this period, including Napoleon Bonaparte himself (portrayed several times by him, as First Consul and later Emperor).

This is also the case of Baron Jacques Marquet de Montbreton de Norvins (1769-1854): politician and writer, during the French Revolution, estranged from his rising career and forced into exile, then a convinced Bonapartist, lieutenant of the army and exponent of prominent of the Napoleonic ruling class, who will later publish the first biography of Napoleon (among his most important roles, that of general secretary to the council of state and royal chamberlain).

One of the most famous Jean-Auguste-Dominique Ingres paintings, Napoleon I on His Imperial Throne, 1806, oil painting on canvas, 260 ×163 cm. Parigi, Musée de l'Armée.

In January 1811, he was appointed police chief of the Roman States, after Rome had been proclaimed the second capital of the Napoleonic Empire in 1808: he thus chose to be portrayed in his new official position, which he would hold for the following three years. His face is austere and rigorous, the only note of color in her dress is given by the knight's ribbon of the Legion of Honor; his loyalty and admiration for Napoleon Emperor is made explicit by the gesture of slipping his left hand under his jacket, posing according to the latter's famous pose.

A comparison between the pose of Monsieur de Norvins and Napoleon: both put their hand under their jacket. Left, Jean-Auguste-Dominique Ingres, Monsieur de Norvins, 1811-12, oil on canvas, 97.2 x 78.7 cm. London, National Gallery; right, Jacques-Louis David, The Emperor Napoleon in his studio in the Tuileries, 1812, oil on canvas, 203.9 x 125.1 cm. Washington, DC, National Gallery of Art.

The mystery of the sculpted busts

Observing the painting carefully, a macroscopic repentance emerges with unusual evidence on the left, only partially masked by the ostentatious folds of the large red drapery: in fact, one can glimpse the image of a sculpted bust, still perceptible to the naked eye, as if in transparency. 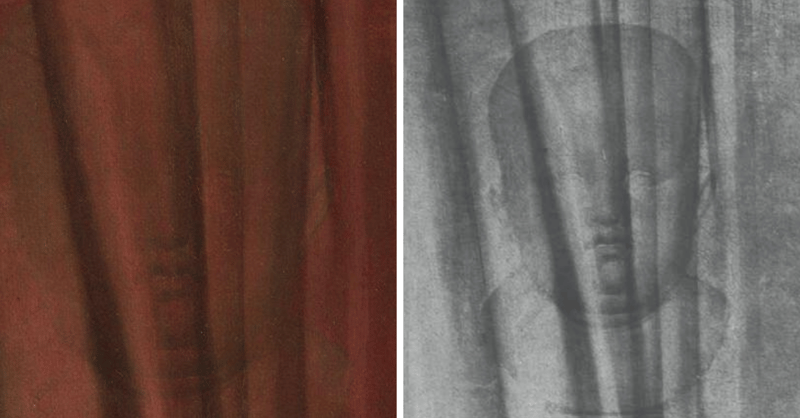 Jean-Auguste-Dominique Ingres, Monsieur de Norvins, 1811-12, oil on canvas, 97.2 x 78.7 cm. Londra, National Gallery. On the left, the detail on the red drapery; on the right, an infrared photo of the erased bust.

Dedicatee of this sculpture was the son of the Emperor, Napoleon Francis, designated King of Rome after his birth in March 1810, but following the fall and abdication of Napoleon in 1814, and the restoration of the monarchy, the presence of this figure was evidently it became a rather uncomfortable iconographic detail, and it was decided to eliminate it.

On the right, as if to distract attention from this disturbing detail, perceived as a ghost emerging from the recent political past, the image of another bust has been added, this time depicting the Roman goddess Minerva, certainly more reassuring in her classical style, which brings the symbology of the work back to a politically more neutral dimension, but whose late insertion is evidenced by the compressed position in the narrow residual space on the right. 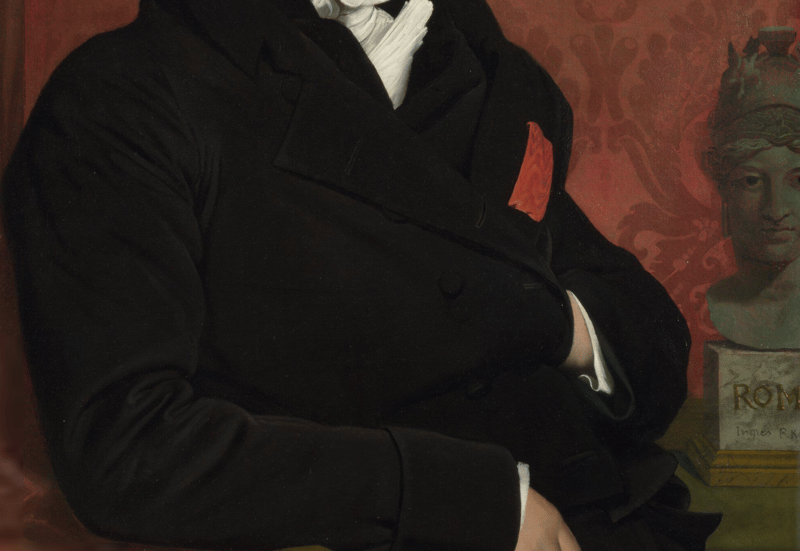