The ongoing COVID-19 pandemic has forced the scientific community to devote itself to the research and development of various strategies to fight SARS-CoV-2 infection. The only informed way to identify new antivirals is through the knowledge of the three-dimensional structure, literally the shape, of the virus proteins that are responsible for cell infection and virus replication. Once the structure of proteins is known, it is possible for chemists to synthesize compounds that block its function, and consequently the virus life cycle. 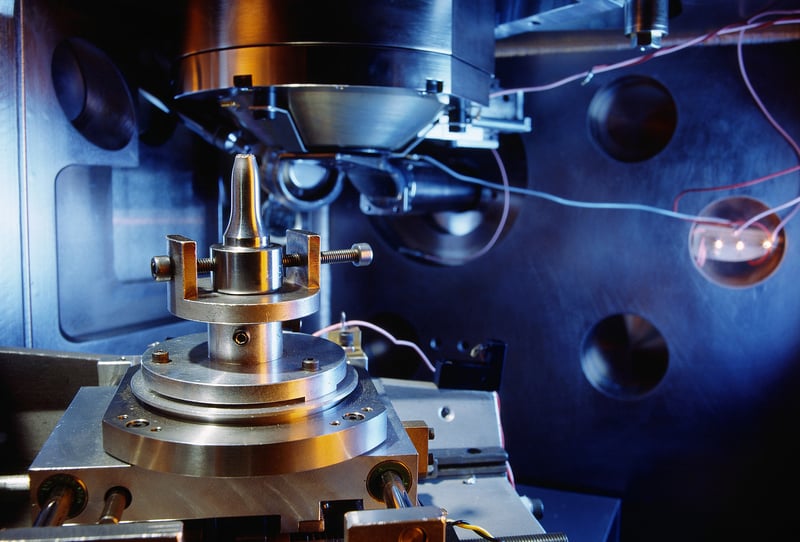 Last week we talked about the SARS-CoV-2 Spike protein, whose structure was determined by cryo-electron microscopy (cryo-EM). This technique allows observing with atomic detail the structure of molecules of infinitesimal dimensions: what does it consist of?

Electron microscopy is substantially similar to optical microscopy, which works by irradiating an object with visible light and refocussing the rays deflected by the object through lenses on the eye retina or on a screen. By using appropriate lenses, we can enlarge the image to appreciate the finer details.

Here the term “resolution” comes into play, i.e. the ability to see two objects as distinct at a minimum distance. The human eye has a resolution of approximately 0.1 millimeters. With optical microscopes that exploit visible light it is possible to reach a resolution of 0.2 micrometers, that is 500 times greater. Such resolution allows observing individual cells, but not smaller objects such as viruses, proteins and other biological molecules.

To “see” even smaller objects, you need to use something other than visible light: electrons. Electrons, subatomic particles and therefore much smaller even than the molecules we want to visualize, are deflected from their path by the atoms of the molecules, exactly as light is deflected by the edges of an object. With very specific lenses, made not of solid materials but made up of electric fields, we can focus the electrons and obtain the image of the molecules.

Example of image of a sample containing protein molecules obtained under an electron microscope. The individual particles of the molecules can be seen. By enlarging the image, an atomic detail can be obtained. Courtesy of Dr. Degano.

Described as such, the technique may seem trivial. But there are many technical issues that have limited their use for years: 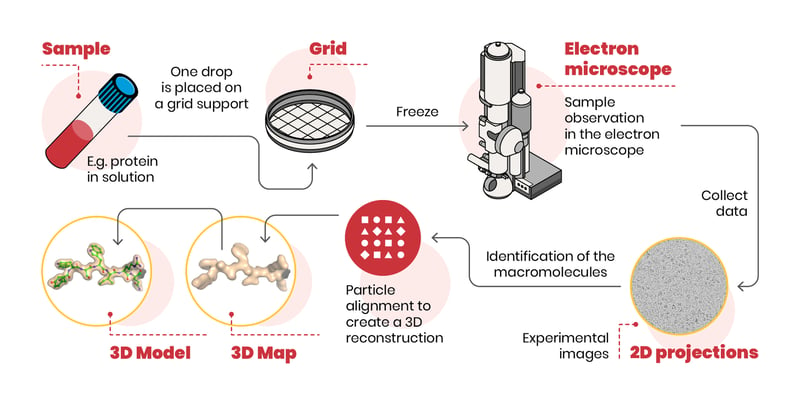 One last difficulty remains: we are able to appreciate the three-dimensional image of an object also because we can look at it from multiple angles. In cryo-EM the object (the molecule) is photographed oriented in many different ways. Therefore, 2D images of randomly oriented molecules in space are used to reconstruct, through sophisticated computer algorithms, the 3D shape of the molecule. Now it’s up to biochemists to interpret electron density and build the protein model! We will talk about this “videogame” in one of the next episodes.

On the left, colored in blue, the electron density of the Spike protein from SARS-CoV-2 obtained by cryo-EM is represented. On the right, the structure of the protein, which as we now know is composed of three equal chains (trimeric), represented with a sphere for each atom. The structure is determined by inserting the sequence of amino acids that make up the protein itself into the electron density. The experimental data derive from the Electron Microscopy Data Bank (https://www.ebi.ac.uk/pdbe/emdb) and from the Protein Data Bank (http://www.rcsb.org/pdb), access codes emd_20078 and 6X6P. Courtesy of Dr. Degano.

Cryo-EM is a cutting-edge and extremely powerful technique, and in the last few years has allowed us to determine the structure of molecules that have long represented the holy grail for many researchers. As mentioned in the previous article, the structure of the SARS-CoV-2 Spike protein has been determined a couple of months after the sequencing of the viral genome, and allowed a fine understanding of it interactions with the ACE2 cell receptor. Like any technique, however, it has limitations: the molecules being studied, for example, must be quite large. Another limit, not negligible, is the cost of the microscope itself and its maintenance.

Are you a Molecular Biology enthusiast? Discover the San Raffaele University's International PhD in Molecular Medicine and contribute to research on the molecular processes underlying human diseases for the development of new therapies 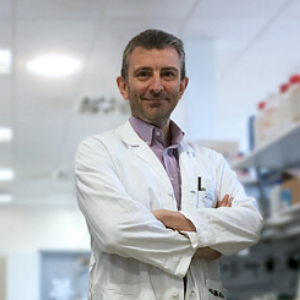