It’s beginning to...smell a lot like Christmas: chemistry of spices 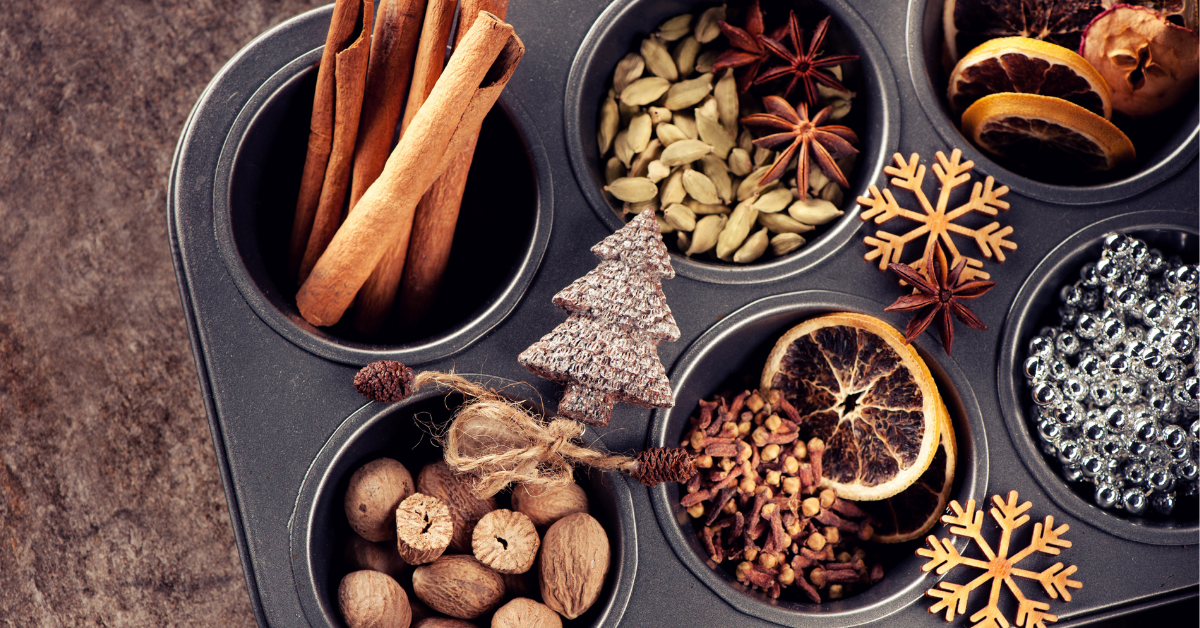 It’s beginning to...smell a lot like Christmas: chemistry of spices

Have you ever noticed that many memories we associate with the Christmas time are linked to a particular smell? It is often the scent of gingerbread cookies, cinnamon, and all those herbs and spices we use during the holiday season.

What curiosities and anecdotes are hidden in the spicy aromas? Let’s find out in this fragrant Curiosiscience!

With a premise: smells, tastes and potential phytotherapeutic effects of spices are not caused by a single molecule, rather more frequently by a set of molecules. For simplicity, in this news we will refer to the main molecules, or historically isolated and associated with the various spices. 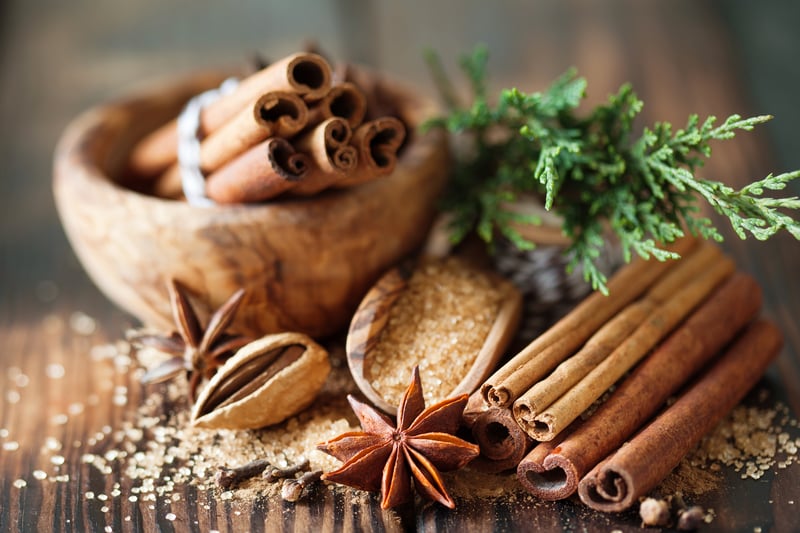 At Christmas, its scent invests our homes thanks to food preparations and decorations: we are talking about the unmistakable cinnamon. This spice is obtained from the dried bark of Cinnamomum, of which there are many varieties, and we can find it in powder or in cylinders (the sticks).

It is one of the oldest spices in the world, even mentioned in the Old Testament (the Jews burned it together with other aromas for the consecration of the Tabernacle) and used in Egypt for the embalming of mummies since 3000 BC. Several are the hypotheses regarding the origin of its name: it would be a Phoenician term deriving from the Greek kinnámōmon, which means “soft wood”; others argue that it derives from the Arabic kin, meaning “plant of China”, and anamon, “fragrant”.

The molecule that most resembles the flavor of cinnamon is cinnamaldehyde, isolated from the essential oil of cinnamon in 1834. Its uses in the kitchen are innumerable: in the West this spice is combined with preparations with fruit, chocolate, biscuits, leavened products; in the East it is also combined with savory products (it is one of the spices that make up curry). 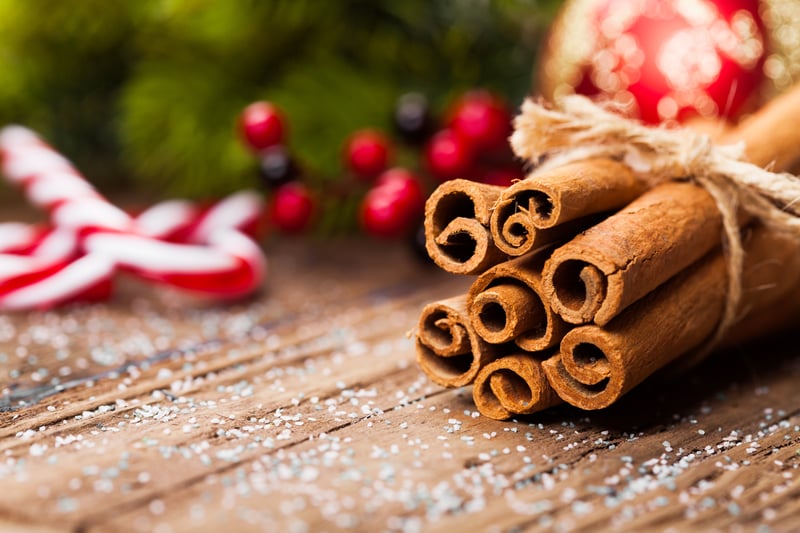 Gingerbread and cookies! Shaped like a house, a tree, a star... imagination has no limits when it comes to spicing our desserts with the ever-present ginger! This is a herbaceous plant of the Zingiberaceae with several uses in the kitchen (as anyone who loves oriental dishes knows).

The unmistakable pungent flavor is given by gingerol, a compound found in fresh ginger. Gingerol has a structure similar to capsaicin and piperine (the substances that give chilli and black pepper their respective spicy taste): once in the mouth, it binds to the same receptors, making us feel the burning sensation.

Cooking ginger transforms gingerol into zingerone, which is less pungent and has a spicy, slightly sweet aroma. On the other hand, when ginger is dried, the gingerol turns into shogaol, which is nearly three times more potent: this explains why dehydrated ginger (such as cubed or sliced ​​ginger you can buy at the supermarket) is more pungent than fresh ginger. For the same reason, dried ginger has better beneficial properties, such as anti-inflammatory and antioxidant ones. From biscuits to puddings, from ice creams to custard, through panettone and pandoro: it is the very sweet vanilla. This spice is obtained from the fruits of a variety of orchid (of the genus Vanilla) native to Mexico.

If you are familiar in the kitchen, you may have heard of vanillin: it is the molecule most responsible for the vanilla aroma, identified for the first time in 1858; today it is on the market in the form of convenient sachets, to give our desserts that unmistakable sweetness.

However, not only flavor: to conquer Europe, starting from France, it was above all vanilla scent. The vanillin molecule in fact has an aldehyde, a very common chemical group in volatile and odorous molecules, which are perceived by the nose and associated with known odors. 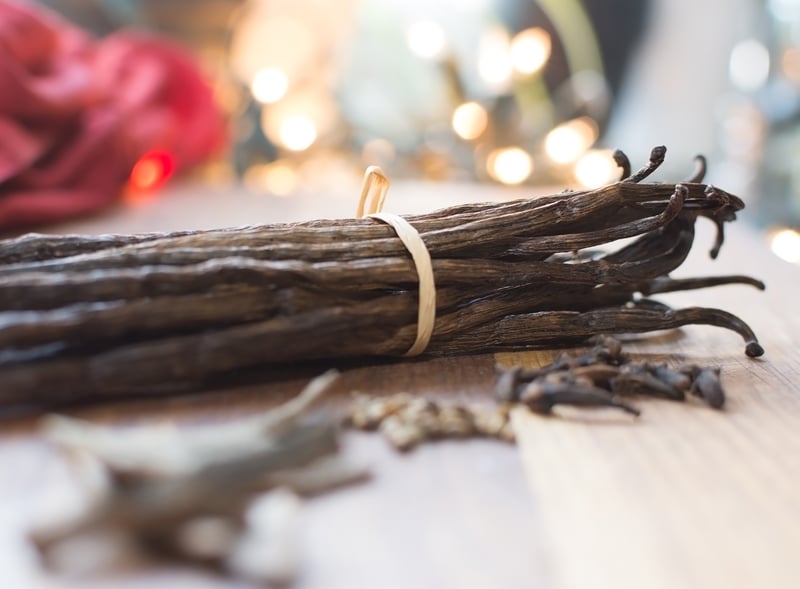 Two words: mulled wine! There would not be the typical aroma of this spicy wine if it were not for the addition of cinnamon, nutmeg and cloves (which we will see shortly). Nutmeg is obtained by grinding the stone of the fruit of Myristica fragrans, from whose name comes myristicin, the main aromatic molecule contained in this spice.

A curiosity: in Europe, people used to carry nutmeg in small bags tied around their neck as protection against the Black Death, probably due to the insecticidal properties of the isoeugenol molecules it contains. Another curiosity, myristicin in high concentrations has hallucinogenic effects! The ingestion of a whole nutmeg causes nausea, profuse sweating, palpitations, increased blood pressure, together with several days of hallucinations.

No worries though, the quantities used in the kitchen are very minimal: there will be no side effects if we indulge in some sweets or sip spiced wine.

Cloves and nutmeg are produced by plants belonging to different families and originating in groups of islands separated by hundreds of miles of open sea: despite this, their very different smell is due to extremely similar molecules.

The fragrant compound of nutmeg oil is isougenol (as we have seen above); the main component of clove oil is eugenol, a very powerful molecule that performs the function of a natural pesticide. The analgesic and pain relieving actions of chewed cloves are also well documented, especially for toothache sufferers.

In addition to their use in numerous Christmas culinary preparations, both sweet and savory, they are used as air fresheners: pomanders, citrus fruits (usually oranges, but also mandarins and lemons) stuffed externally with cloves.

A tip: place them near heat sources to intensify the dispersion of their fantastic aroma! 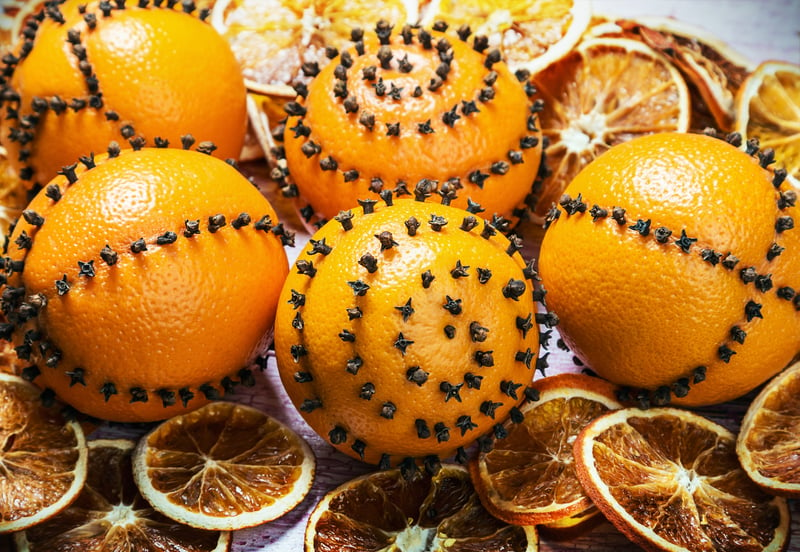 This spice is perhaps the one with the most “Christmasy” shape: a star – hence the quite intuitive name – with eight woody points, containing precious brown oil seeds. The molecule associated with the star anise aroma bears the curious name of shikimic acid, from the Japanese anise flower (shikimi) from which it was isolated in 1885.

Its flavor is reminiscent of licorice and is decidedly pungent; in the kitchen it is the protagonist of sweet dishes or combinations with vegetables. Before using it, it is best to boil the pods in water and then grind them until you get an aromatic powder. Outside the kitchen it is also often used as a decorative element for centerpieces, wreaths and Christmas trees. Lastly, a non-spicy still very wintery perfume. In our homes, the iconic Christmas trees are in all likelihood artificial. The typical pine smell that can be smelled in forests comes from pinene, an organic compound found in the resin of various conifers (mainly Pinaceae).

This molecule, belonging to the terpenoid family, exists in two forms: α- and β-pinene, which we find in pine needles and rosemary, but also in other vegetables such as hops, dill and parsley. Pinene has a wide range of phytotherapeutic properties, including analgesic, antimicrobial and anticoagulant effects, as well as anti-inflammatory and antioxidant properties. 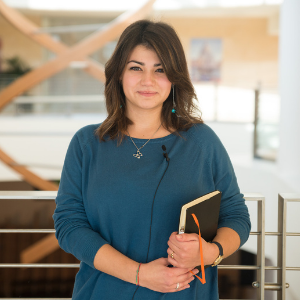