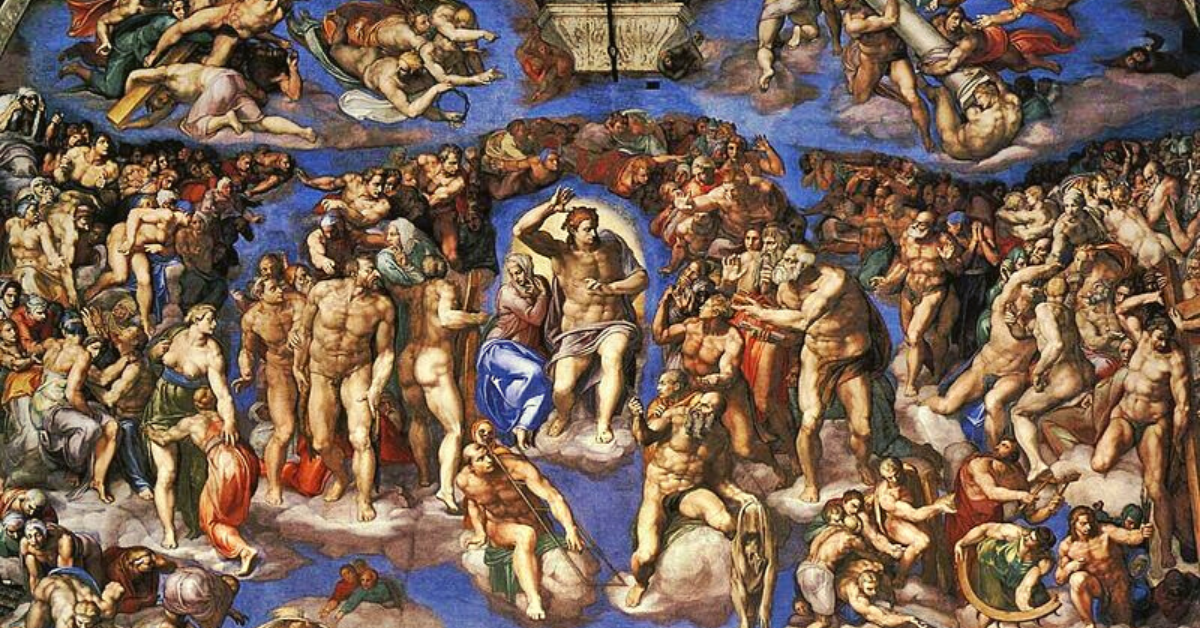 The term "apocalypse" comes from the Greek apokálypsis (ἀποκάλυψις), composed of apó (ἀπό, from), and kalýptō (καλύπτω, hide) and means "throwing away what it covers", "removing the veil", "discovering", " unveiling"," revealing". Such revelation is connected theologically with the articulation of the naked bodies depicted by Michelangelo. The Michelangelo nudes in fact threw away what covered them, their clothes, to evoke with the explicit expressive force of their hypertrophic bodies the "conformation" and "incorporation" to the "mystical body" of Christ, as expressed by the "Anthropology of similarity" proposed by the eschatological theology of St. Paul. 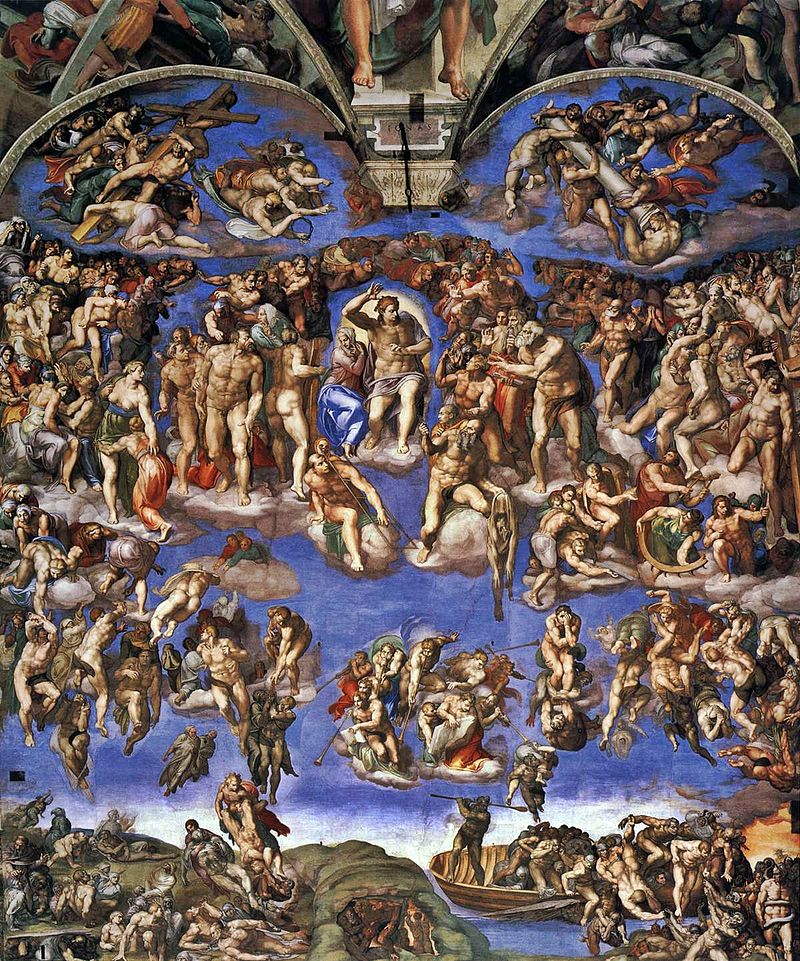 The main message that is revealed during the Last Judgment is precisely centered on the resurrection of the flesh of the elect, called to conform to the very body of Jesus Christ. Figure, the latter, which monumentally and "terribly" stands at the center of Michelangelo's composition, exhibiting his Apollonian naked body while exercising his supreme judgmental power, which both absolves and condemns (with his right hand raised he condemns and with his left he absolves). 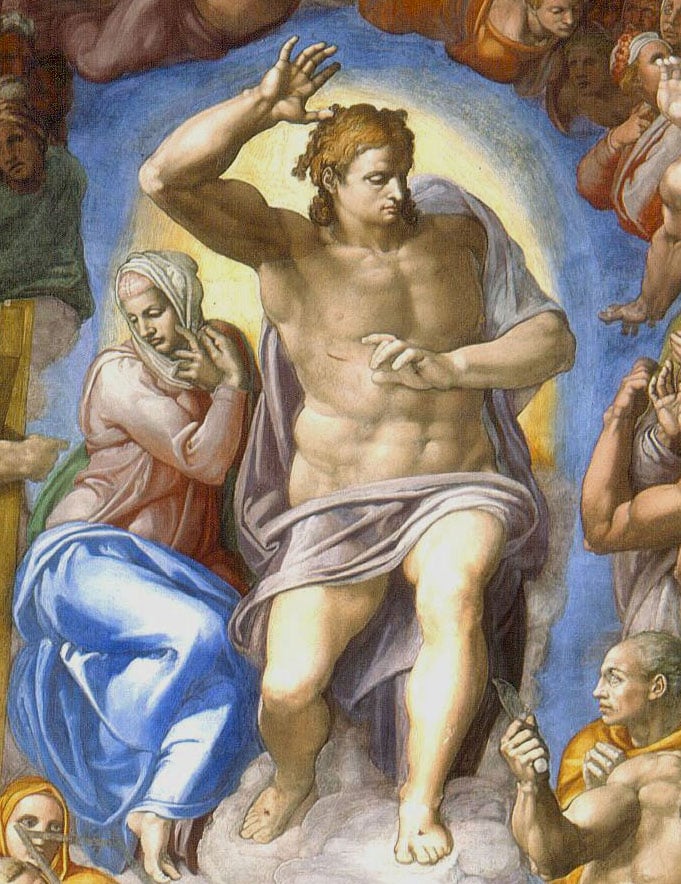 The exhibition of nudity proposed by Michelangelo, although justifiable in the theological sense, did not please the Council of Trent which, the same year of Michelangelo's death (1564), decided to appoint an apprentice to the artist, Daniele da Volterra, to paint flaps of cloth and in some cases breeches or whole clothes to cover the nakedness of most of the characters in the master's Last Judgment.

The intertwining of theological-eschatological issues with issues of a cultural nature linked to the sense of decorum of sacred representations is articulated and complicated even more if we take into consideration the dilemma that the fresco restorers found themselves facing (with consultancy of superintendents and art historians) between 1990 and 1994, during the complex and highly controversial cleaning phase of Michelangelo's Last Judgment. A masterpiece whose full legibility and enjoyment was, according to most experts, now compromised because it was veiled by a patina of dirt made up of damp mold, candle fumes, age-old dust and protective glues applied by previous restorations. 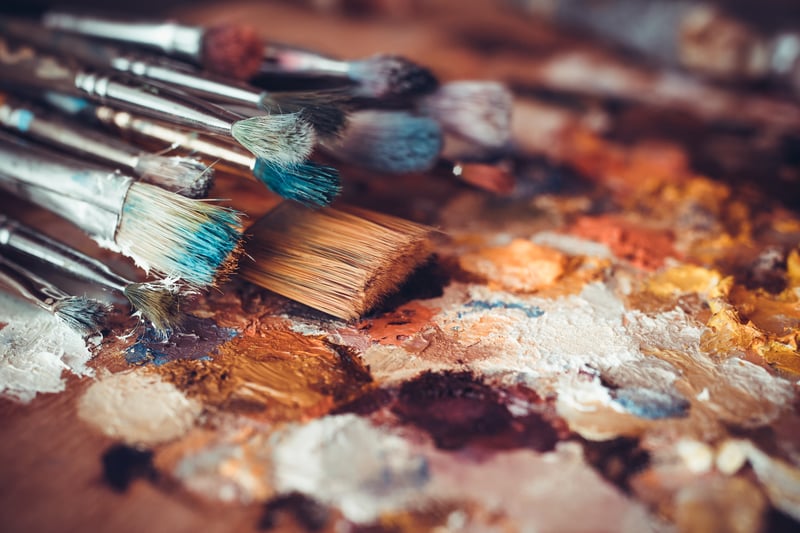 Keeping or eliminating the interventions

As regards the unveiling/veiling dialectic, the people in charge of this delicate cleaning phase had to decide whether to keep or eliminate the additions made by Daniele da Volterra. The question, in practice, was to establish whether to restore the original aspect to the work, i.e. the one conceived and created by its author, or whether to allow the additions that over time had superimposed on the original. 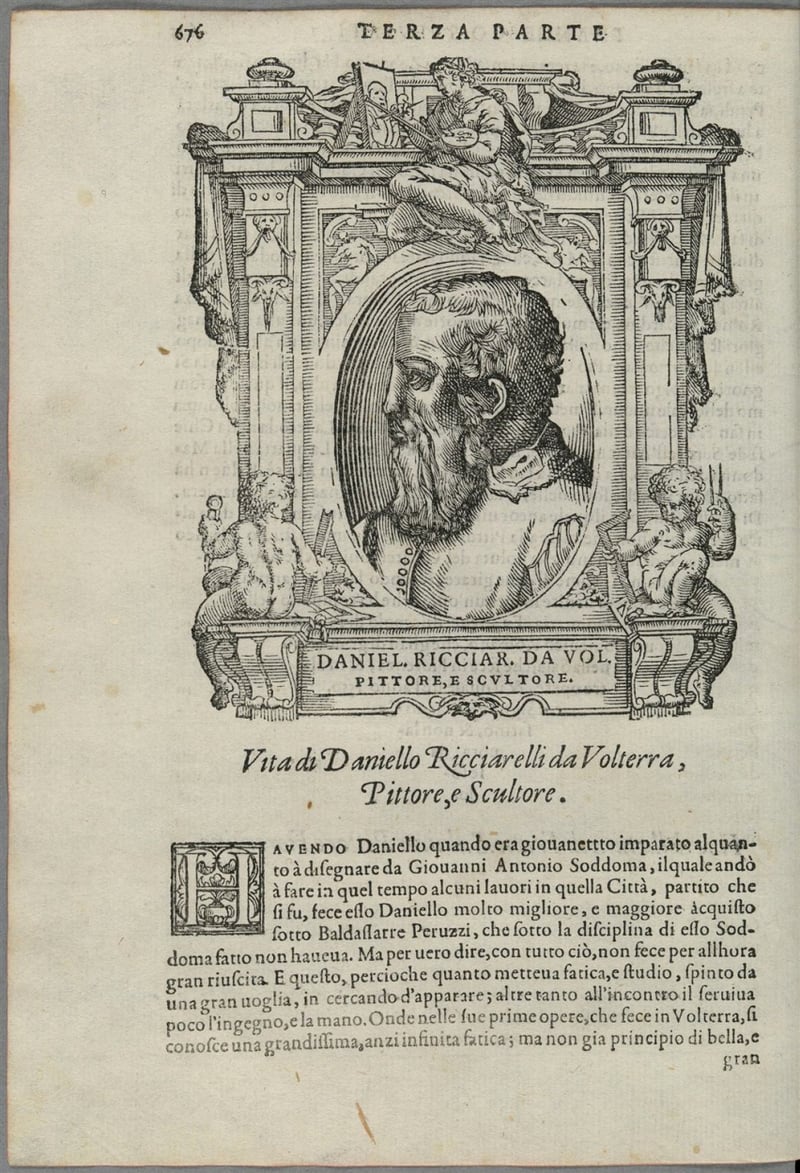 Portrait of Daniele Ricciarelli from Volterra, in Giorgio Vasari, The Lives of the Most Excellent Painters, Sculptors, and Architects, ed. 1568.

The Solomonic solution was to leave some traces of the Tridentine censorship as historical evidence of the (active and invasive) reception of Michelangelo's fresco by his contemporaries and as a significant visual documentation of the dominant mentality of the second half of the 16th century, recovering at the same time as much as possible the original aspect of the fresco, especially with regard to the rendering of the colors, the brilliance of which, after cleaning, favorably impressed the whole world. Of the veiling of Daniele da Volterra, who after this operation of dressing the nudes by Michelangelo was ironically nicknamed the “Braghettone”, some of the cloths and garments that cover the nakedness of the saints still remain today. Among the most significant are: St. Peter, St. Bartholomew and St. Catherine of Alexandria. 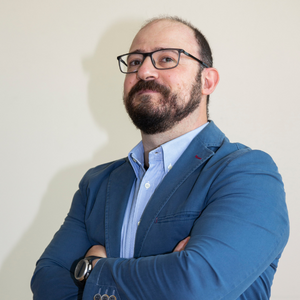