Women who are leaving their mark

Women who are leaving their mark

On the occasion of the International Women's Day we propose an inter-faculty article that presents some of the women who have made the history of Medicine, Psychology and Philosophy.
Male figures are historically more cited and represented, but we would like to recall the decisive presence of women who have given an equally significant contribution in their respective areas of competence.

For each Faculty we have selected two female figures who have left an incisive mark in their fields of study; the short biographical profiles suggest not only the originality of these women in knowing how to reorient entire disciplinary fields, but also the gender difficulties they encountered in a context, that of research, at that time almost entirely precluded to women. 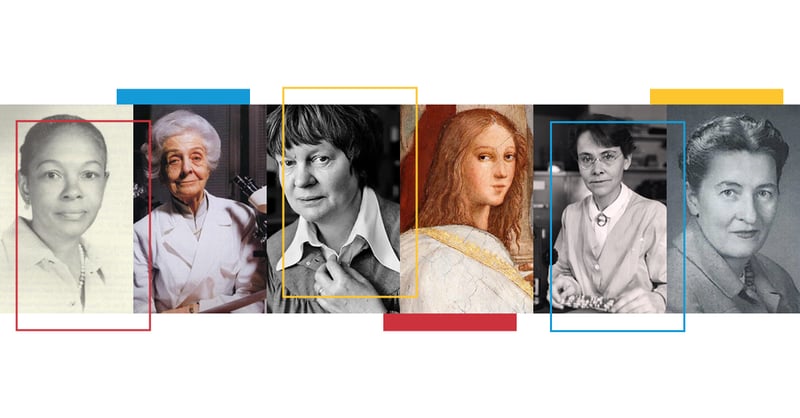 She has been called a philosopher since ancient times, as Maddalena Bonelli reminds us in the introduction to Philosophers, teachers, empresses. For a new canon of the history of ancient philosophy. After her father, she directs the Neoplatonic school and, in full Alexandrian spirit, she excels in disciplines that are fragmented today, such as astronomy, mathematics, philosophy, mechanics. It is difficult to reconstruct her doctrines with philological rigor: what we know of her thought comes from the distant testimony of those who knew her. However, we know that Hypatia's fame and recognition were such as to push her aspiring students to undertake long journeys to gain access to her teaching. Hypatia, a reference of intelligence and wisdom in life, is brutally murdered, on the basis of political and religious motives, in the persecutions by Christians against the Neoplatonists.

Key figure of contemporary moral philosophy. Trained between Oxford and Cambridge, she rehabilitates the role of metaphysics and the mental in the ethical sphere. Against the non-cognitivist tradition, Murdoch believes that moral activity does not end in action and that activities that are not acts, such as revision of perception and redescription, have moral relevance. Let's think, for example, of the passage, entirely internal, from a prejudicial vision of another person to a more realistic, accurate and attentive vision. The sphere of moral activity must be extended to the mental: one chooses and acts well only by striving to perceive the complexity of what surrounds us, expanding the limits that habits, traditions and selfishness impose on us. For a more extensive analysis, see The Moral Mind (Carla Bagnoli) and Murdoch's APhEx profile (Miranda Boldrini).

«Everything has been easy for me in life. Difficulties have been shaken off me, like water on a duck's wings» [1]. This phrase by Rita, born in Turin in 1909 from a middle-class family, clearly expresses the courage and strength she was able to give to her own existential and professional choices. Compared to her male peers, the young Rita had to overcome three obstacles. She belonged to the Jewish minority in the context of fascist Italy —which was guily of the racial laws and her expulsion from the academy in 1938—, she was a woman who unlike the others did not want to "adapt to married life" [2] and had decided to devote herself to a profession, scientific research, in which women then had marginal spaces. Thanks to her teacher Giuseppe Levi, she emigrated to the USA and developed an experimental model with chicken embryos that allowed her to discover the "nerve growth factor" (NGF) leading her to win the Nobel Prize in 1986 [3]. This discovery allowed neuroscience to hook up with nascent molecular biology and is today the basis of some therapeutic treatments, especially in the ophthalmic field [4].

"A feeling for the organism" is the well-known book by E.F. Keller [5] who tells the life of Barbara, born in Connecticut (USA) in 1909, famous for having revolutionized genetics with the discovery of the mobile genetic elements in corn, the transposons. A discovery for which in 1983, at the age of eighty-one, she was awarded, undivided, the Nobel Prize. A researcher often isolated from the mainstream of the North American academy, Barbara immersed herself in the work with an approach often referred to as "mystical" and an ascetic devotion to research. Thanks to them she developed an original working method and a perspective of microscopic analysis of corn chromosomes that led her to observe such innovative data, namely that genes could jump between chromosomes, that the scientific community ignored, a typical example of a discovery too premature, taking almost thirty years before accepting them. Today transposons are being studied in gene therapies and in the development of brain diseases [6, 7].

It was February 1946 when Columbia University first awarded a PhD in Psychology to a black woman. It was received by Mamie Clark, a pioneer in the study of the development of awareness of ethnic identity. Clark is often remembered for having developed, together with her husband, the "doll test", for the study of identification and racial preferences. Her studies provided empirical support for the famous 1954 verdict in the Brown vs. Board of Education of Topeka trial, contributing to the overcoming of the doctrine of "separate but equal". Not to forget the founding of theNorthside Center for Child Development in Harlem, Clark's response to the lack of psychological services dedicated to poor, black and minority children.

Her research on the bonds between mother and child represent milestones of modern attachment theory and her studies have revolutionized the way parents, psychologists, pedagogues and pediatricians view parenting. Known for the development of the “Strange situation” [8], a standardized approach to classifying attachment style in children, she was one of the most cited psychologists during the 20th century and has received numerous awards. In an era when women were limited in their professional roles, she represented a model of feminism "of substance"; just to give an example, she demanded fair wages when she discovered that she was paid less than her male colleagues.